The Iranian human rights group are very active on reporting on incidents of Iranian Islamic regime violation of human rights but in their reports to Mr. Ahmad Shahid envoy, specific address to ethnicity or sect is concealed. According to reports, 70% of all political prisoners are among Kurds from Iran. However, this numbers and reports have been water-downed by Iranian groups in Diaspora. The last incident includes the case of Mr. Sediq Kaboodvand. He is named as the father of Kurdistan Human Rights Society (KMMK). His name and prominent Kurdish prisoners were missing from Iranian human right campaign appeal to international community last week. Kurdish activists believe that name of Kurds are being concealed (or only picture them under the obscure name of Iranian activist) when their report is sent to international organizations such as UN, Amnesty and others. As soon as US foreign ministry called for Mr. Kaboodvand release few days ago, Iranian social media addressed his name, although without addressing his true cause and connectivity to immense daily atrocities against Kurds in Iran. Kurdish prisoners rarely get the break or visit family in jail. Mr. Kaboodvand was deprived of the family visit for years and only after going in hunger strike, he was permitted to visit his son who is suffering cancer. He had no health issue before jail, and now he is suffering from serious illnesses. They are reports of intentional illness injection into prisoners bodies via food and pills poisoning.

UN Human right should setup separate committee involving member of those ethnicity and sect in order to receive honest and true reports on violations.

Below pictures are him before and after prison and his visit to his son. 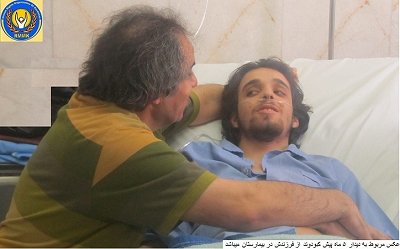